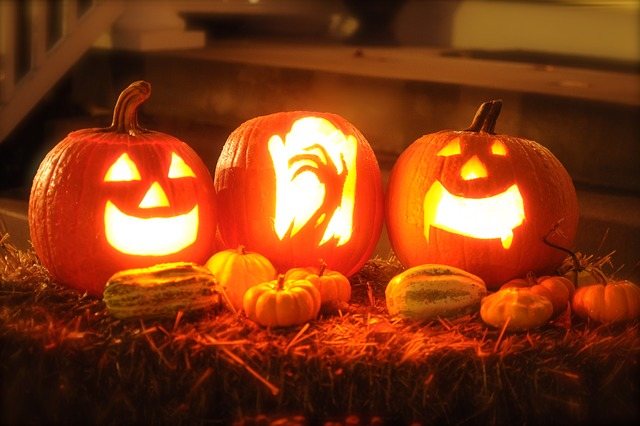 Halloween invades the town of Carefree in the form of whimsical pumpkin carvings from master sculptor Ray Villafane and the Villafane Studios team for a fourth year. The Enchanted Pumpkin Garden, a free admission, one-of-a-kind fall festival celebrating the magic of the season takes place October 19-28, with the incredible artistry of Villafane Studios on display throughout the four-acre Carefree Desert Gardens in downtown Carefree.

Voted “Best in the Valley” fall event in 2017 and 2018 by Phoenix Magazine, visitors are invited to experience the many new mischievous pumpkin characters, artfully imagined and frolicking in their enchanted garden home. In addition to the playful pumpkins and holiday vignettes, Villafane and his team will carve ten 3-D pumpkin faces, which are preserved and displayed in tanks that resemble Saguaro cacti. Another popular attraction is the giant pumpkin on display for visitor photos, with Villafane handling the carving chores the second weekend of the event. Villafane’s team of carvers will create new offerings daily throughout the garden.

Highlights include two family-instructional carving nights with Villafane on October 25-26, sponsored by Desert Foothills YMCA. Costume contests for kids, family/group and adults will be held on Saturday, Oct. 27, and a pet costume contest will be held on Sunday, Oct. 28, sponsored by Carefree Pet Resort. Other popular activities include: Basha’s “Adopt a Pumpkin” patch; a pumpkin pie eating competition, with pies provided by Venues Café; a Harvest Market, featuring vendor goods and autumnal treats; a beer garden featuring craft beers provided by Four Peaks Brewery and wine; culinary food trucks; and a new weekend Haunted Happenings area, where for a $5 fee visitors will enjoy a petting zoo, pony rides, a haunted house, corn maze and other family-friendly attractions. Other special events will round out the week.

About the Town of Carefree
Carefree is a scenic community of over 3,700 residents nestled in the Sonoran Desert Foothills. Incorporated in 1984, Carefree is regarded as one of the most inspiring and livable places in Arizona and centers its culture on desert lifestyle, architecture, culinary arts, health, wellness and community involvement.

About Ray Villafane
Based in Arizona, with a workshop and gallery, Ray Villafane is an internationally acclaimed American sculptor who has travelled throughout the globe fashioning exceptional figures and scenes out of pumpkins, sand and snow. Villafane has been called, “the Michelangelo of pumpkin carving,” by Martha Stewart, carved for the President at the White House, and has appeared on numerous national TV programs as well as holding two entries in the Guinness Book of World Records. He’s also known for Food Network’s Outrageous Pumpkins competitions, which he won in 2008, 2009 and 2010.