Autumn at the Arboretum Fall Festival Highlights "It's The Great Pumpkin, Charlie Brown" Theme with 90,000 Pumpkins, Gourds and Squash 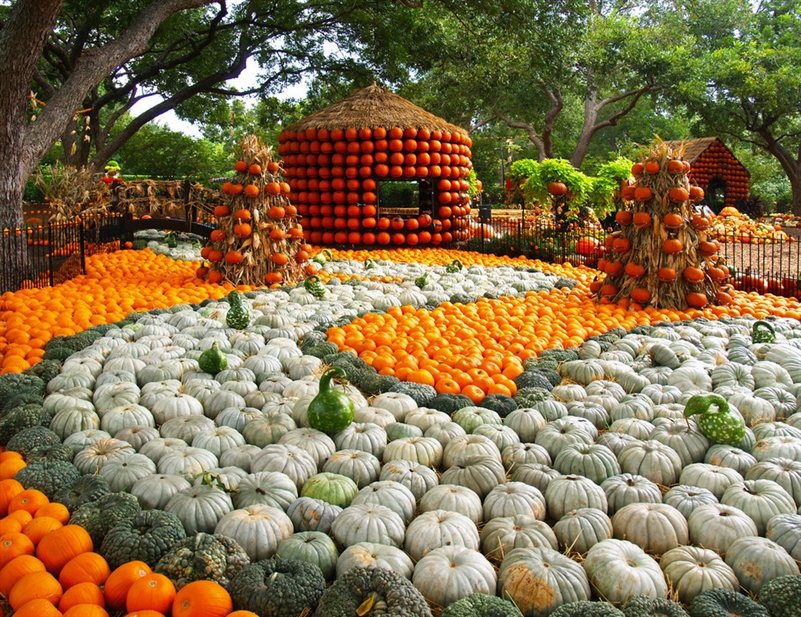 Autumn at the Arboretum Fall Festival Highlights “It’s The Great Pumpkin, Charlie Brown” Theme with 90,000 Pumpkins, Gourds and Squash. The festival runs from September 21 to October 31, 2019.
Photo by: prnewswire.com/Rogers-O'Brien

For the 14th year, Autumn at the Arboretum, presented by Rogers-O'Brien, highlights the nationally acclaimed Pumpkin Village featuring pumpkin houses and creative displays utilizing more than 90,000 pumpkins, gourds and squash. Named one of "America's Best Pumpkin Festivals" by Fodor's Travel, the Dallas Arboretum's fall festival opens on September 21 and runs through October 31. Throughout the 66-acre garden, the breathtaking colors of fall include 150,000 autumn flowers accented by more than 50 varieties of pumpkins, gourds and squash.

With the theme, "It's The Great Pumpkin, Charlie Brown," the event features plenty to do, see and photograph including:

"Known for amazing and creative displays, our 50-member horticulture team creates an awesome Pumpkin Village display where more than 250,000 people visit during Autumn at the Arboretum. They experience the garden in its fall glory, walk in the pumpkin houses and enjoy the programming throughout the garden," said Alan Walne, Dallas Arboretum's board chairman.

For more information about Autumn at the Arboretum, visit dallasarboretum.org.

About Peanuts
Charles M. Schulz first introduced the world to the Peanuts characters in 1950, when the Peanuts comic strip debuted in seven newspapers. Since then, Charlie Brown, Snoopy and the rest of the Peanuts gang have made an indelible mark on popular culture. Peanuts animated specials and series air on major networks and streaming services, including ABC, Cartoon Network and Boomerang in the U.S., Family Channel in Canada, and the WildBrain network on YouTube worldwide. Fans also enjoy Peanuts through thousands of consumer products around the world, amusement parks attractions, cultural events, social media, and a daily comic strip available in all formats from traditional to digital. In 2018, Peanuts partnered with NASA on a multi-year Space Act Agreement designed to inspire a passion for space exploration and STEM among the next generation of students. The Peanuts characters and related intellectual property are 41% owned by DHX Media, 39% owned by Sony Music Entertainment (Japan) Inc., and 20% owned by family of Charles M. Schulz.